Team Battle – One for all, all for one!

One morning, several years ago after an event, Linda (Lednimedvidek / Volunteer CZ), Roy (Borghuis / Volunteer NL) and FHQ were sitting together for breakfast and had an idea. This idea has now been implemented together with asp_fan_cb (Volunteer DE).

About 14,000,000 Team Battle Towers have been placed on the map in Europe, Australia, USA and parts of Canada in a grid 2km apart (at the nodes).

Every circle on this map example represents a tower, which will appear with the following symbol: 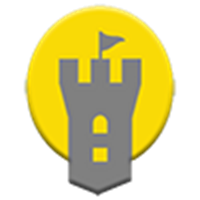 A tower has a capture radius of 50m, like any other flag. Some towers will be easy, some will be more difficult to capture and therefore able to be claimed for your team. Take it as a personal challenge to capture as many towers as possible. If it is difficult to reach a particular tower, then it will be just as hard for someone else to do the same. After all, Flagstack is an outdoor GPS game, and now even more!

If you capture a tower to claim it for your team and faction it will change the icon to reflect the logo of the faction you represent. The zoom level on the map will adjusted in the app and web to ensure stability and server performance.

The tower will remain visible on the map once captured and can be captured by a team member of a different faction. For every tower that your team has claimed your team will receive 5 Credits every 6 hours (midnight, 6am, 12pm and 6pm FHQ timezone). You will receive an app chat message with a credit summary and can easily keep track if your team has lost or gained towers overall.

Likewise, you will receive an app push notification if an opposing team of another faction has captured and claimed a tower that has been in possession of your team. You can turn this notification on or off in the profile setting via the webpage.

Yes, there will be towers that seem impossible to capture – please relax – over the next months there will be regular updates (month by month?) to further expend the Team Battle. So, something to look forward to!

At the end of the Team Battle the total credits will be split equally amongst team members.
As an example: 25,000 team credits /  5 team members = 5,000 credits for every player
Credits earned can be exchanged for items in the Credit-Shop.

Further links: Create a team, what are factions

learning by doing – Just join a team and capture the first few towers – everything else will become clearer with time. Don’t be afraid to contact us or the Volunteers – we are always there for you and your questions! Contact via Email or PM – and most important: It is only a game!